two employees on the board of directors :

For the first time in 2013, the BRL Board of Directors welcomed two employee-directors in anticipation of the law on safeguarding professional interests coming into effect in 2014.

Based on the principle of equality (a profit-sharing scheme that is independent from salaries and work hours), the agreement, which rewards the Group's employees for corporate performances, also reflects the principles of determined CSR policy, placing particular emphasis on the following:
commitment to gender equality

BRL's Observatory of Equal Representation and Gender Equality has been in place since 2013, conducting action and maintaining links with the local and national stakeholders in charge of equality.

Its annual reports illustrate the commitment and the progress of the Group.

The number of women present on the BRL Group Executive Board rose from 25% to 33% in 2013 (against a national average of only 7%).


BRL's General Manager, Jean-François BLANCHET, also spoke at the forum on women and employment organised by FACE, and sat at the forum's round table on gender diversity, Women and Leaders.


facilitating the integration of young people and maintaining employment for seniors
In October 2013, BRL signed a "Generations Agreement". The agreement concerns the whole  BRL Group, and was one of the first to be signed in the Languedoc-Roussillon Region. Among others, it plans to develop school-workplace alternation opportunities, financial incentive for car pooling by youths living more than 30 km from their place of work, support for part time employment for senior staff if they so wish, reduced standby service hours (hardship) and youth-senior pair work to ensure the transfer of skills for key positions.

In 2013, 46.87% of the newly recruited workforce within the BRL Group were young people. Over the whole year, 25 school-workplace alternation contracts and 2 professional development contracts were signed. The maintenance of the senior workforce was slightly above the targeted 9% (9.72% of the total BRL Group workforce).


signature of the brl group's first "emploi d'avenir" contract
In October 2013, in the presence of  Damien ALARY,  Chairman of the Board of Directors, the Group's first "emploi d'avenir" ("job with a future") contract was signed. In line with the objectives of the Generations Agreement, it is a pledge to facilitate employment for young job-seekers.

Since then, two other "emploi d'avenir" contracts have been signed by BRL Exploitation and BRL Espaces Naturels.


brl is awarded the handifférences tropy
Late 2013, BRL took part in the first Etats Régionaux de l'Inclusion en Languedoc-Roussillon, in favour of workplace integration for the disabled, organised by APF and FACE (Gard, Hérault and Pyrénées-Orientales). BRL won the Handifférences trophy for its best practices, which were memorably recorded by the La Poste - Face Gard group in their compendium published for the occasion.
Donwload 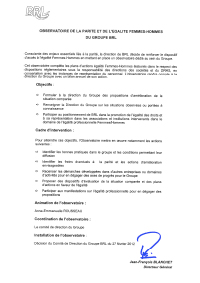